Posted on August 26, 2020 at 7:28 pm by mysocialpractice
Categories: Vision Tips 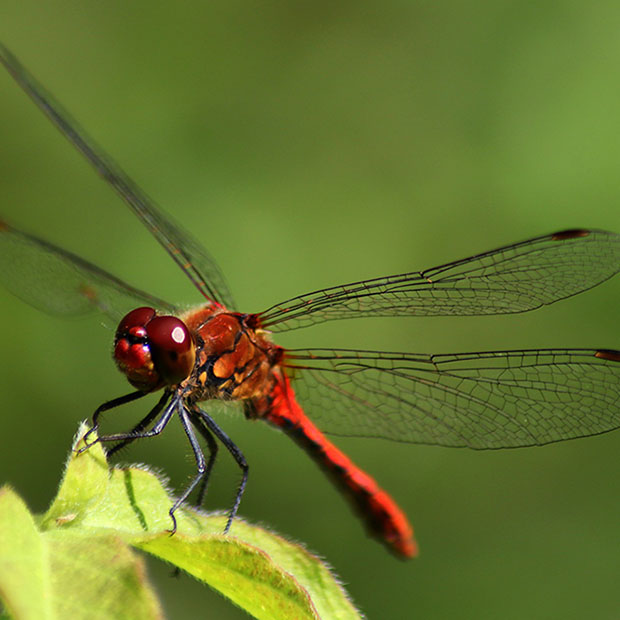 Just because we work with human eyesight, it doesn’t mean we can’t appreciate some of the unique eyes in nature.

Depending on how they hunt (or avoid being hunted), where they live, and even how big they are, animals have a wide array of vision adaptations that human eyes don’t have. Let’s take a look at just a few of them.

The Super-Speed Vision of Dragonflies

Our eyes perceive images at a rate of about 60 frames per second. It’s why when we watch a movie, we see a continuous stream of motion instead of a series of still images flickering quickly past. Dragonflies, on the other hand, see at a rate of 200 frames per second. They also have compound eyes, meaning that they process several thousand separate images at once, instead of just one from each eye like we do. There’s not much they aren’t going to notice!

Have you ever shone a flashlight into your backyard at night, only to see two bright lights blinking back at you? Maybe it was your dog or your cat, or maybe a nosy raccoon. What makes certain animals’ eyes light up like that in the darkness? It’s a piece of anatomy called the tapetum lucidum. It sits right behind the retina and works kind of like a mirror. Light hits the retina on the way in, then bounces off and hits the retina a second time on the way out.

Animals with a tapetum lucidum in their eyes have far better night vision than humans do, but it comes at a cost. The light doesn’t hit exactly the same spot on the retina when it bounces back out, so the image these animals see is always slightly blurry at any distance, and it still would be with glasses! As cool as night vision is, we think we prefer being able to see in sharp detail.

Many animals see in a very different spectrum of color than we do. Dogs lack cones that sense red light, so they see in a range of yellows, browns, and blues. Cats are the same, and the funny thing is that so are cows, so it’s not the red color of the flag that riles up bulls! Bees and butterflies actually see more colors than we do, including ultraviolet colors. And birds can see in ultraviolet too, which helps them track down their food, among other things.

Which Animal Eyes Are Your Favorites?

Do you know of any other cool animal eyes? We’d love to hear which ones you like best and what’s so interesting about them. And if it’s been a while since your last eye exam, we’d also love to see you again so we can make sure your eyes are working as well as they should be!

We love our patients!